It isn’t uncommon in polytheistic traditions for deities to possess many different aspects or epithets to describe different parts of their nature. Each individual deity can almost be thought of as possessing an entire pantheon within themselves, and in many traditions different aspects of that god or goddess is called upon for different things. In Santería, these different aspects of certain Orishas are called “caminos” or “roads”, and while all roads are understood as still being the Orisha in question, they can seem very different from one another. Though Yemaya is often thought of in Neopagan circles as being the quintessential “mother goddess”, in her road of Okuti she is Ogun’s partner who drinks rum, smokes cigars, and goes into battle with a machete. I have heard that Okuti embodies the cold, violent aspect of the ocean. Conversely, Asesu is a gentler road that embodies the sea foam. Both of these aspects are simultaneously true representations of Yemaya (and the ocean itself), even if they seem to be contradictory. The idea of different aspects of deity is also found in Hinduism, and mantras to different deities often include 108 different names/aspect of the deity being worshipped. For example, one may call upon Ganesh as Bala Ganapati (“the childlike”), Vira Ganapati (“the valiant warrior”) or Vaghana Ganapati (“Lord of Obstacles”), each name telling us something different about the complicated figure that is Ganesh.

In modern Heathenry, I have seen some people use the many heiti and kennings of our gods and goddesses in a very similar way. Though many of the names of the gods could be thought of as purely poetic in nature, designed to help the poet create alliteration in their work, I personally hold that they were most likely also used in the worship of the gods in ancient times. These names serve to tell us something about the nature of the gods, and could also invoke specific aspects of a god or goddess depending on the name being used. Calling on Óðinn in his aspect of Óski (“god of wishes”) is bound to show a very different face of Óðinn than Draugadróttinn (“lord of the undead”), even when they both refer to the same deity. Worshippers may also find that they resonate with one heiti of their deity more than others. Fellow columnist Galina Krasskova has mentioned that the “path” of Óðinn she feels closest to is Gangleri (“way-weary”), who may be thought of the embodiment of Óðinn as the eternal wanderer and seeker of wisdom.

The various kennings and heiti of the gods show us that the nature of the gods was imagined to be very complex by the ancestors. Óðinn, though usually only recognized and called upon for his beneficent aspects in modern Heathenry (such as his role as Sigðir the “victory-giver”) is also equally Bölverkr (“evil-worker”) and Skollvaldr (“ruler of treachery”). Rather than lumping Óðinn completely into all of his good traits or all of his negative traits, I think it’s more balanced to say that Óðinn is a deity that has some very extreme positive and negative aspects, and that one should be careful about which “Óðinn” they are calling upon.

It’s needless to say that Loki is a god who is looked at with a great deal of suspicion in modern Heathenry, and some people claim to have had some very negative experiences with Loki in their own lives. But this begs the question: if they were expecting Loki to be an evil force in their lives, could it be that they unintentionally attracted the attention of one of Loki’s darker paths? Perhaps their experience would have been different if they call called upon Loki in one of his gentler aspects. I have also met Lokeans whose understanding and experience of Loki was very different from my own; but I have also met Lokeans whose image of Loki was almost identical to mine. Could our mutual or dissimilar alignment with a certain heiti of Loki serve to explain this? While Loki has many more names than the ones I will be sharing (a complete list can be found in Playing With Fire: An Exploration of Loki Laufeyjarson), the 9 I will be sharing are those that I consider to be the primary “roads” of Loki one is likely to encounter. While I have attributed my own interpretation to these heiti, Loki worshippers may be interested to see which one they resonate with the strongest. When one is crowned with an Orisha in Santería, divination is performed to find out which “road” of the Orisha that person carries (trusting their crowning Orisha has more than one). Similar divination could be performed by a Loki-worshipper (or a devotee of any Norse god) to determine which aspect of the god/dess walks most closely with them if they weren’t already sure. I have outlined how to create such a “yes/no” system of divination in volume 2, number 1 of Walking the Worlds.

Hopefully this list of Loki’s heiti may be found useful for worshippers, and hopefully will inspire other Heathens who work closely with a fulltrui to develop similar descriptions. Knowing the many different aspects of the deities is a way of fleshing out their worship for modern times, and coming to know them in a more complete way.

The identification of Loki as Loðúrr is one that has been highly debated, though in reality becomes perfectly blatant if one reads the Icelandic rímr, which are epic ballads from the 14th century. One of these ballads, Þrymlur (which was written roughly between CE 1300-1400) follows the same basic storyline as Þrymskviða. Both stories are an account of how Þórr’s hammer Mjöllnir was stolen by the giant Þrymr, who demands Freyja as his bride in exchange for it. Þórr is then persuaded to disguise himself as Freyja in order to reclaim his hammer, and Loki accompanies him disguised as his bridesmaid. In the Þrymlur account of the story, Loki is directly referred to by Þrymr as “Lóður” when he comes to visit him.

18. To men it seemed fewest of guiles
To men [it seemed fewest] of lasting tricks
Lopt had closed the cloak of feathers
Loki began to fly high
19. He flies out over Ásgarðr
In the same way [over] land as sea
Called ill in the strong-ward, (?)
He comes into Jötunn home.
20. To a beach the servant came very easily
Ahead on a ring of land;
Out stood before Óðinn’s thrall
A giant Þrymr on a grave-mound
21. The ugly one speaks in a cunning way—
he inquired in smooth words—
Lóður come you hither in health,
What call do you have in inquiry?

Because they were written so late, some scholars have ignored the evidence within the rímr for the Lóðurr/Loki connection entirely. However, Haukur Þorgeirsson suggests this is largely due to an overall unfamiliarity with these poems, and makes a case for the theory that the poet of Þrymr knew that Lóðurr was an alternate name for Loki directly from oral tradition.2

This is Loki’s aspect as a creator god. In this aspect he is the brother and traveling companion of Óðinn and Hænir. Lóðurr grants Askr and Embla lá ok litu góða (“blood (?) and good color”),and therefor can be seen as the god of the fire of the blood and the metabolism. He is also connected to the creative fire of the sun and stars and is the owner of Sirius (Lokabrenna). This aspect of Loki is directly connected to the Hamr within the soul complex, which is the vehicle through which one can fare-forth and shape-shift.

Loki as the fire of exorcism and establishing sacred spaces. In Old Norse religion, a vé was a sacred space that was cleared with fire. I personally see Villi and Vé as alternate names for Lóðurr and Hænir, and therefore see Vé as yet another heiti of Loki. This is the aspect of Loki that consumed the heart of an unnamed witch in Völuspá hin skamma and gave birth to monsters as a result. Vé is also the embodiment of the fire of purification that consumed Gullveig (who I see as an aspect of Freyja) when the Æsir burned her three times, connecting him to the art of seiðr through this mutual initiation.

Loki as the fire of the sky (lightning) and the bringer of divine knowledge. The companion of Þórr [Thunder} that travels with him through the sky in Þórr’s chariot and joined him on the journey to Þrymr’s hall. This is also the aspect of Loki that owns the “sky-shoes” described by Snorri in Gylfaginning and who borrows Frigg or Freyja’s falcon skin to deliver messages for the gods. 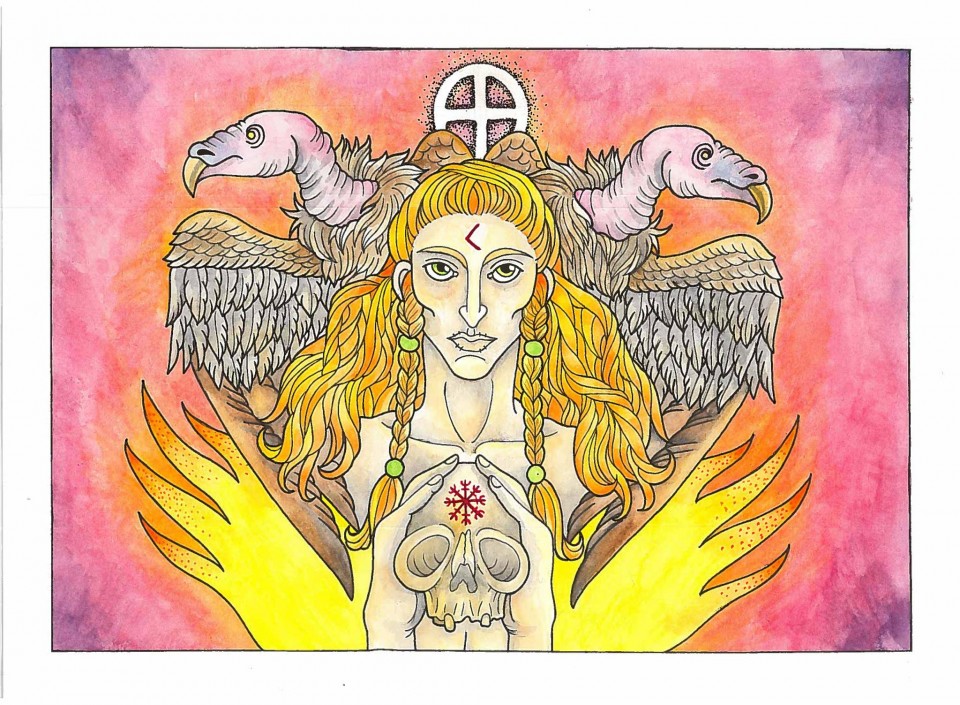 “Loki as Gammleið”, copyright 2016 the author, used with permission

Loki in his aspect of the fire of cremation. This is the road of Loki that was in an eating contest with Logi (wild-fire) and who consumed Baldr’s funeral pyre. This is also the aspect of Loki who releases the soul when a body is cremated. As the feminine nature of this name suggests, in this aspect he is also the mother of Sleipnir (who can be imagined as a symbolic funeral bier).

Loki as the divine trickster. In this aspect he’s associated with the fire of the forge and is connected to the dwarves and craftsmen in general. This is the aspect that stole Sif’s hair and provided new hair for her and gifts for the other gods. He also stole the treasure from the dwarf Andvari.

Loki as the breaker of worlds and the vengeful god of destruction. This aspect rules wildfires and volcanoes and steers the ship Naglfari, leading the Muspilli into battle. In this aspect, Loki is the father of Fenris, Jörmungandr, and Hel and is the consort of Angrboða. He goes into battle with the sword Lævateinn (“destruction wand”).

This is Loki´s aspect as the god´s deciever and the instigator of conflict. This aspect of Loki deceived Iðunn into being captured, stole Freyja’s necklace, tricked Höðurr into firing a dart of mistletoe at Baldr, and Þórr into visiting Geirroðr’s hall without his weapons. This aspect of Loki can be likened to the “need-fire” of Nauthiz, as he creates the difficulties that the gods must overcome in order to grow in strength and perform great deeds. He is the spider who spins webs of fate that the gods find themselves tangled in.

Symbol: Cauldron (such as the meat of the god’s sacrifices were boiled in)
Colors: Orange, yellow, pale-blue

What is Heathenry Missing?